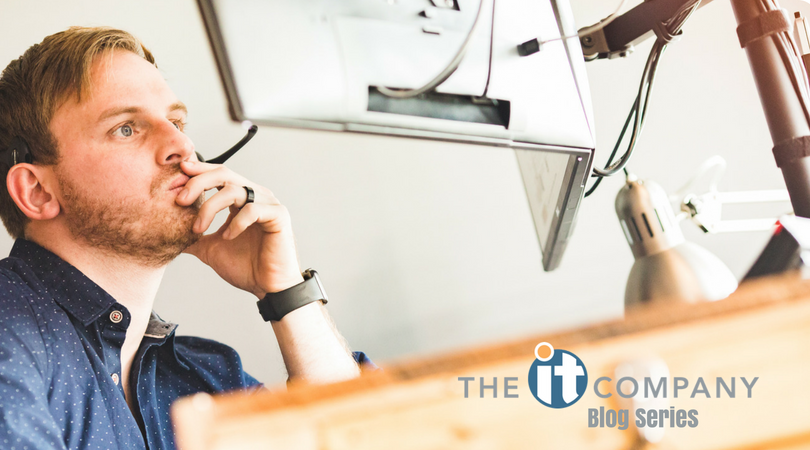 Meet Cody Crowell, an important piece of your IT department.

Cody is a vCIO (Virtual Chief Information Officer) for customers of The IT Company and additionally, does work in sales. Cody’s primary focuses are meeting with customers on a regular basis to discuss IT health, upcoming projects, customer satisfaction and strategic planning. Cody has been working for The IT Company for six years now. Cody described his position as an opportunity to help customers gain the most out of our relationship with them. Prior to working here, Cody worked for a small, break-fix (something breaks, then you fix it) IT company. Cody stated that because of the break-fix model it was chaotic at times. In a break-fix world, at any time, an emergency could happen.   That dynamic made it hard to plan and achieve bigger tasks.

Cody’s story is unique from other members of your IT department because The IT Company actually acquired the company he previously worked for. Because of this, his hiring process was a little bit different. Regardless of how Cody ended up at The IT Company, he said by joining The IT Company’s team he was looking for stability and growth. Cody also mentioned that he played baseball in college and was looking to be a part of a bigger team with a common goal, and he felt like The IT Company would give him this opportunity. We asked Cody what he thought would have happened for him had he not made the transition to The IT Company which was a difficult question for him to answer. Cody predicted that he would not be nearly as far along in his IT career. Cody was also humble in admitting that some of his skills are not tangible but because of The IT Company’s culture, relationships with customers, and our mission, he is able to utilize his technical skills as well as personality skills. Ultimately, Cody says the biggest difference in his life now from before his hiring at The IT Company is that he is now able to grow as a person, maintain personal happiness, and provide for his family.

When asking Cody about his personal experience of what draws customers to The IT Company, he said the he often hears them coming in with frustrations that technical products are not working or running properly creating downtime with their systems. He said often this leads to someone in the company spending their time focusing on learning how to fix these problems which results in them not being able to spend time investing in their primary job. Cody says he enjoys being able to be a part of the solution for these companies by becoming their IT department. Cody proudly summed The IT Company up by stating “We are your IT department. We provide IT department services for small to medium businesses in the Knoxville area.”